learning about won buddhism at the won dharma

earlier this week, i did some intentional learning about won buddhism. while we were at the won dharma meditation and retreat center for a colab work meeting, i wanted to do more digging into their what and why than i did the first time. sitting in on their morning meditation, i got to experience some of their routine.

honestly, it reminded me of many other things i’ve seen in other places. and in some ways, that was really resonant. in other ways, it brought up the standard repulsion that i feel in what seem to me like static, dogmatic approaches to spiritality and God/Spirit/the Universe/something bigger.

the familiar parts were: 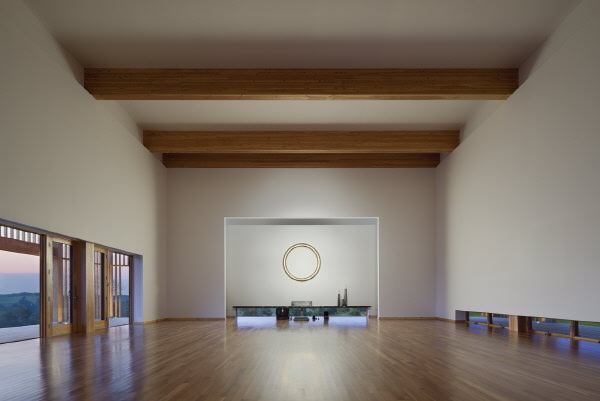 note: the giant gold symbol on the wall is the il-won or “the one circle” symbol that is central to won buddhism

the one familiar part that really turned me off here (and similarly turns me off in other places) is the need to state that this belief system is true. in one of the morning chants, one of the last lines in the words are literally “this is true, not false.”

anyone or anything that needs to assert that sort of statement into itself immediately becomes suspicious in my eyes.

something that i did appreciate about won buddhism that seemed different from other religious spaces i’ve observed is the explicit acknowledgement that the world’s religions are all built on the same foundational wisdom. there is a line in one of the earliest sections of the won scripture book that speaks to that directly. and that, i think was dope. because most religions say, in addition to the “this is true, not false” statement, “this is also the only truth and fuck all other truths.” and i’m glad that won buddhism doesn’t do that.

as i get older, i’m just coming to believe more and more that, even though it has sprouted up in different places, from different people, at different times, all spiritual traditions that have staying power are rooted in some similar (deep) truths.

anyway, it’s interesting that i’ve thinking about this now, with this lens, as casper and angie’s novitiate grows…