i use this concept in my facilitation all the time but have always just attributed it generally to the field of education. i definitely want to be credited for things i come up with so i felt like it made sense to anchor this concept in a real person now that i know who it is.

below is an adaptation of the learning zone model by tom senniger. 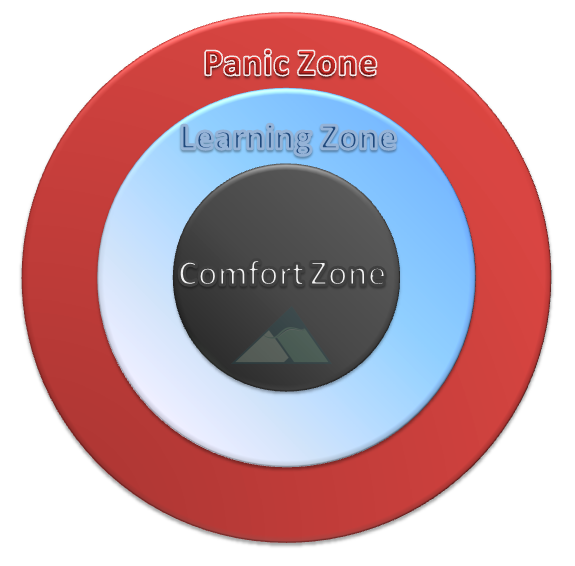 i use this in most facilitated spaces i lead. and i associate it with one the learning agreement: be responsible for your own learning.

the model mostly speaks for itself, but i like to walk it through really quick with folks and explain what each level might “sound like” when in it:

comfort zone: “yeah yeah, i know this. when are we gonna get to the new stuff?” stretch zone: “woah, i’ve never thought about this in that way before.” panic zone: “i could never do that because [insert reason].”

i like to tell people that it’s their responsibility for putting themselves in their own stretch zone. and that the stretch zone is different for each person but it’s really important to be there because no one wants to be wasting time or money.

generally speaking, if i’m facilitating a space for someone, they have asked for me to be there. 99% of the time, their workplace is paying me to be there. and even if they weren’t, the combined value of each person’s time who is there adds up to a LOT and fast.

my time is also valuable. and even though i’m getting paid, i don’t want to get paid for people to stay comfortable and not learn. i facilitate and educate because i believe i have tools and practices that support moving people towards their goals.

ha, this post took a different direction than i thought it would, but i want to write one last thing that i often say in the room: it is impossible to learn without being uncomfortable. the comfort zone means you are allowing your existing knowledge to filter everything (new or not new) into your current understanding. it is only by releasing the hold on your worldviews that allows us to shift them. and you don’t have to release the hold forever, but for the hours we’re in the space, it is a necessity. i intend to create spaces that are safe enough for that temporary release (which IS uncomfortable) so that we can shake things up in our minds, learn, and then go back to the world/work changed.

in a sense, this is a significant part of what i think it means to do transformational work.