book review: a world without email 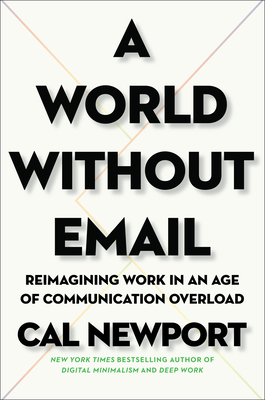 A World Without Email: Reimagining Work in an Age of Communication Overload by Cal Newport

email hijacks one of our most brilliant evolutionary adaptations: we want to respond to each other. know that this desire, which is important, has been placed in an impossible context: we are not designed to respond to the number of people email opens us up to. we must learn how to be human while continuing to figure out how to make these tools work for us.

this book is newport’s update and maybe even upgrade to the insights he unpacked in his previous book, deep work. just like in that text, his analysis of the problems, this time of email, and where they come from seems spot on. what i really i love about this book though, is that it feels like he is learning (and he says as much in early parts of the book); he is learning that his somewhat dictatorial ideas about how people can directly apply his practices to their lives isn’t effective. it seems now he’s taking the stance: give less advice, give more principles. then let people figure out how to apply the principles in their own contexts. i love that.

that said, i disagree with some of newports most fundamental assumptions. for example: that the most important, valuable work humans can do is knowledge work. i disagree. knowledge work separate from grounded reality is not valuable at all. another example: increasing productivity is an important goal. again, i disagree. productivity gains are only valuable in light of broader political framework and analysis. it seems that newport has no concept of “enough.” i can’t remember it mentioned a single time in the entire book. i wonder what would happen if someone gave newport an awareness of white cis-hetero colonial imperial patriarchy, and then had him review all his research to date…